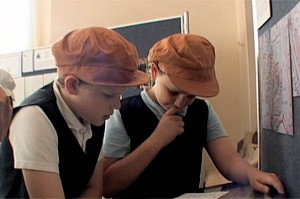 The pupils of Holy Trinity School Matlock Bath dressed to travel back in time to visit The Great War – Life in The Bath’. They donned vintage school ‘uniform’ of caps and waistcoats for the boys and mop hats and white smocks for the girls and walked to the Grand Pavilion to investigate what was in the exhibition. They were pleased to see that the work they had done as part of their study in school was on display. On hand were the 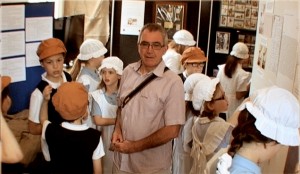 organising committee to show them the other exhibits. The photos show Peter Baranek with a group of youngsters at the display about the family who sent the postcard used in the poster for the exhibition. The second photo shows two boys completing their activity sheet. The pupils also had a go at giving a name to the ‘old soldier’ who was made by patients at the Newholme Hospital Bakewell. On hand for help and advice was also a young solder in the uniform of an officer. The whole event was filmed and will appear on the website in due course. Before they left, each was presented with a replica postcard of the one sent by Albert Hodgkinson aged 14 of Matlock Bath to his father Lawrence who was serving in the trenches in 1915. We are grateful to Crich Tramway Village for the loan of the costumes. The exhibition will be open daily from 10.00 until 4.30 in the Pump room of the Grand Pavilion and admission is free. Period dress is however optional.

Email or Tweet this page to a friend or print: